Occupation Orders Where There Is No Violence

Still living under the same roof

You are divorcing, still living under the same roof and the situation is impossible. Things seem to be taking forever and you just can’t go on like this. The atmosphere in the house is terrible and the children are beginning to suffer. You need space and one of you is going to have to go. You want your spouse gone and are considering applying for an occupation order. There is rarely a divorcing couple living under the same roof who would not feel that their lives would be better off without the other one being there.“

Judges are very well aware of the stress and pressure which a relationship breakdown brings. It makes people do strange things and can make them act badly. It can result in odd behaviour around the house and a person acting totally out of character. Sometimes the other person will over react and may seek medical help that would not otherwise be considered necessary simply to establish a case. These are unfortunately only too common circumstances which are well-known to judges and which will not usually result in such a draconian order as a spouse being forced out of his home.

Violence or no violence and occupation order

The position may however now have changed as a result of the decision of the Court of Appeal in a case called Grubb where a decision to make an occupation order was upheld even though there had been no violence.

In this case the wife had not alleged violence against her husband although she claimed that he was verbally abusive at times. Her GP had diagnosed moderately severe depression and her case was simply that she needed to live away from her husband whilst the divorce and ancillary matters were being sorted out. The husband’s case was that although there may have been unpleasantness in the house, she was using the application to pre-empt the decision on financial matters and ownership and occupation of the family home.
The complaints by the wife were entirely subjective and not of the nature which would usually persuade a court to exclude a husband from his home and property. This was particularly the case here as there was no viable alternative accommodation for the husband. Although undoubtedly the living conditions were difficult and unpleasant there is a requirement for the court to carry out a “balance of harm” test. It is doubtless further arguable as to whether the harm incurred by having to live in difficult circumstances when divorcing outweighs the harm of losing your home.

Notwithstanding these arguments over the “balance of harm”, the main concern however is the use of occupation orders and domestic violence remedies as a form of interim ancillary relief order. Once one party to a divorce leaves the matrimonial home, either voluntarily or by order of the court, it would be most unusual if they were to ever return. Status quo is established and usually it will not be changed.

See Downloads related to your subject. 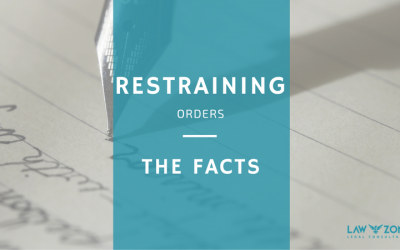 Restraining orders are injunction orders made by a criminal court-usually a magistrate court-to protect the victim of...

Matrimonial Home Rights   If, as a spouse or civil partner you do not legally own a share of the property you...