When it is not possible for the parties to agree the financial issues in divorce it can take some time before these can be decided by the court. There will need to be full disclosure of incomes, pensions and the like and valuations carried out on the matrimonial assets.
Whilst all this is going on it is often the case that a spouse (usually the wife) is left with no money to pay the household bills and maintain herself and the children. When this happens she should apply for maintenance pending suit.

In all probability the court will then make an immediate order that the other spouse pay maintenance until all the financial claims have been determined and a final Order made. Such an order will act as an incentive to encourage a reluctant husband to cooperate in reaching a final settlement.

Following the filing of a petition for divorce, nullity or judicial separation either party can apply for an interim maintenance order known as maintenance pending suit. The order can be backdated to the date of the petition and will come to an end on the pronouncement of decree absolute.

As the maintenance pending suit order will be for a limited period full investigation of the parties’ resources and financial needs will not be undertaken. That may come later when final orders are sought. The test is just what the other spouse can afford to pay given their own requirements and liabilities. The judge will have a very wide discretion.  “…as wide and unfettered discretion as can be imagined” in the time-honoured words of one High Court Judge.

Applications for maintenance pending suit are made by way of the prescribed application Form A. If the application pre-dates exchange of Forms E, you must file with the application a draft order and a ‘…short sworn statement explaining why the order is necessary and giving the necessary information about your means’. If the Respondent has not filed Form E, he ‘must’ file a sworn statement referring to this at least 7 days before the hearing.

The Rules require that the court must list the maintenance pending suit hearing not less than 14 days after the application. Applications are generally listed for half an hour. This may be insufficient to deal with all issues especially as it can be usual for the hearing to incorporate other matters such as the First Appointment.

The availability of an Order

The application will be subject to the ‘overriding objective’ that the court deals with cases justly between the parties.

The leading cases on the principles to be applied on an application for maintenance pending suit have established the following.

(i) The sole criterion to be applied in determining an application is ‘reasonableness’ which can probably be construed as ‘fairness’.

(ii) A very important factor in determining fairness is the marital standard of living. This does not however mean that the court must replicate that standard

(iv) Where the affidavit or Form E disclosed by the payer is obviously deficient, the court should not hesitate to make robust assumptions about his ability to pay. The court is not confined to the mere say-so of the payer as to the extent of his income or resources in such a situation. The court should err in favour of the payee.

(v) Where the paying party has historically been supported by payments from a third party, and now asserts that the payments have stopped   the court is justified in assuming that the third party will continue to make the payments at least until final trial.

There is a limit to what the court can do in the time available. In the absence of oral evidence and cross-examination, the court cannot make findings of fact as to a party’s credibility or draw inferences as to the extent of the respondent’s income. The court will be helped in its deliberations by the extent of compliance by the paying party with his or her duty to make full and frank disclosure; and the force of the points you make in the light of the disclosure made by the paying party and the other evidence of the lifestyle and spending of that party.

If a paying party asserts that he does not have the means to meet the maintenance pending suit claimed, it is for him to provide full and compelling disclosure to demonstrate that this is the case and thus that the assertions of the applicant that he or she is more wealthy are based on sand and have little or no reasonable prospect of success. Thus, full and frank disclosure by the paying party can avoid or minimise the unfairness or oppression to that party which would result from a court not accepting his or her assertions as to means.”

Apply using Form A. Notes on completion are provided. Unless it is considered that mediation and information on the process could assist an exemption on the basis of urgency should be ticked.

Things can go wrong with a divorce through mistakes even where it seems there is agreement that the marriage is over... 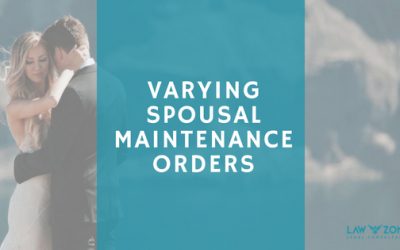 Orders for maintenance of a former spouse (or periodical payments) made in divorce proceedings can always be varied,...

Freezing Injunctions On the breakdown of a marriage or civil partnership, a freezing order can be made to prevent one...