If you have been injured in an accident which was not your fault and want to make a claim for the loss you have suffered you are not necessarily talking Court proceedings. Straightforward accident claims rarely if ever end up in Court.

Providing that the person who caused the accident has insurance, you simply need to make an insurance claim. This does not require any particular legal knowledge and there is usually no need to employ a lawyer or someone to make the claim for you. It is something which in the vast majority of cases a person can handle themselves. All that is required is some organisation and a basic knowledge of the legal principles and procedures that will be involved. This is what this book will show you. By dealing with a claim yourself you do not have to share your damages with anyone else. As there will be no legal costs for the insurance company to pay you will be able to negotiate a significant increase in what you are paid.

Liability insurance covers nearly every motor vehicle, home, business, and other property. So in virtually every accident, you will need to deal only with an insurance adjuster and not with a lawyer or judge. And making a successful insurance claim usually requires nothing more complicated than providing a clear explanation to an insurance adjuster, in plain language, of how the insured was careless and how such carelessness caused the accident. When you negotiate your claim for insurance compensation, you probably won’t be using these legal concepts to discuss your accident. The cause of your accident may well be obvious, and the only question may be how much compensation is appropriate. Even if one of these issues does arise in your case, chances are you won’t hear an insurance adjuster use all these legal terms. Nor will you need to use these terms yourself. Instead, you and the insurance adjuster will almost certainly negotiate using general language about whose fault the accident was and how much your claim is worth.

All that is required is some organisation and a basic knowledge of the legal principles and procedures that will be involved. By dealing with a claim yourself, you do not have to share your damages with anyone else. As there will be no legal costs for the insurance company to pay, you will be able to negotiate a significant increase in what you are paid.

Claims for personal injury fall into the area of law called tort or tortuous liability. A tort is a civil wrong. The civil wrong in most personal injury claims is negligence, and it must be shown that it was the negligence of the defendant which led to the injury and consequential loss to the claimant.

Law Zone have an Ebook you can download explaining all you need to deal with an accident claim yourself. 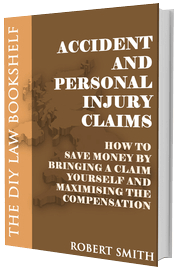 All claims have two separate and distinct fronts. The first is liability. Who is responsible? The second is the quantum of damages or what compensation you should receive for your loss. The battleground is likely to be one or the other, and sometimes both. In many cases, the defendant (or more often their insurers) will not (or cannot) dispute liability, but will argue on the amount of damages you are entitled to for your loss or injury. It could, however, be the other way round.

Liability will often attach to more than one person. If you come out of your house in the early morning and are knocked down by the milkman, you would sue both the milkman and his employer. The dairy is what is known as vicariously liable for their employee. You would not however be able to claim the amount of your loss from each of them. You are not allowed to recover your loss twice and to make a profit from a claim.

A claim for breach of statutory duty must show:

Many statutory duties concern health and safety in the workplace. Others relates to occupiers of buildings. A person in occupation or control of premises owes a duty to persons lawfully entering or using the premises under the Occupiers Liability Act 1957. This duty is defined as the ‘duty to take such care as in all the circumstances of the case is reasonable to see that the visitors will be reasonably safe in using the premises for the purposes for which he is invited or permitted by the occupiers to enter’. Thus, if you are injured when walking through a shopping mall by something falling on you, it is likely that there has been a breach of the Occupiers Liability Act, and it is not necessary to prove negligence.

The legal rule is that people must be ‘taken as they’re found’, meaning that all people, regardless of physical ability, have a right to make their way through the world without unnecessary danger – as long as they have not created that danger by being careless themselves.

There are a number of possible defences to personal injury claims, which include:

The compensation to be claimed for a personal injury is known as damages. The purpose of an award of damages is to compensate the person who has suffered loss rather than to punish the person who caused that loss. In addition, there is a general rule that you may not benefit or make a profit from an accident.

Damages can be divided into ‘general’ damages and ‘special’ damages.

General damages are to compensate you for the pain, suffering (past and future), and loss of amenity (ability to enjoy life) resulting from the accident. They will include future loss such as a handicap on the labour market, loss of future earnings, and foreseeable expenses such as the cost of medical care or equipment.

Special damages are to reimburse you for the expenses and losses which can be quantified in monetary terms. These could be the cost of repair to a motor vehicle, damage to clothing, loss of earnings and the expense of medical treatment. They include losses both now and in the future as far as can be reasonably foreseen.

Special damages tend just to be an exercise in arithmetic. They are a case of proving the financial loss and then adding it up. They will be subject to a ‘claw back’ of any DSS payments made by that department’s Compensation Recovery Unit. A schedule of special damages should be prepared and sent to the insurance company as soon as possible.

General damages are not so simple. Pain, suffering, and loss of amenity must be translated into financial terms. There has, over the years, evolved a set of conventional principles providing a provisional guide to the comparative severity of different injuries, and the introduction of brackets of damages into which particular types of injury fall.

Thus, loss is compensated according to a tariff. The tariff is based upon reference to decided cases, and damages awards made by the court in similar cases. Guidelines have been provided by the Judicial Studies Board, and account will always be taken of inflation.

The award will always be upped or downed dependent upon the circumstances and nature of the claimant.The particular circumstances of the claimant, including his age and any unusual characteristic which he suffers, are taken into account. What happens in practice is that the regularly published judicial works are considered, which give details of awards and the claimant’s circumstances. This enables the claimant and the defendant’s insurers to assess likely awards, should damages come to be decided by a court.

Drafting a Statement of Claim

END_OF_DOCUMENT_TOKEN_TO_BE_REPLACED

Determining legal responsibility for an accident or injury (referred to as "liability") will usually depend on whether someone was careless or "negligent." It's easy enough to say that the person or business that caused an accident must pay for your injuries. But...