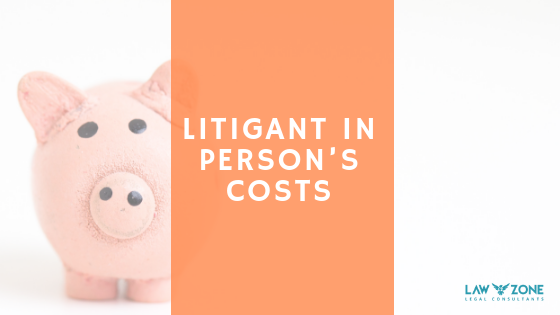 The costs claimed can be calculated in one of two ways:
• an hourly rate to reflect actual financial loss; or
• a fixed hourly charge, where actual loss cannot be established.

Where it is possible to show an actual loss you will recover that loss, even if it is more than the rate of
£18 per hour. You should therefore calculate whether your actual hourly loss is greater than £18 per hour.

If you are not able to show that you have suffered a financial loss, then the flat rate of £18 an hour for the spent dealing with the litigation applies. While such a rate is low compared with the hourly rate of a solicitor or barrister, it should still be claimed.

The total figure which you can claim (excluding disbursements) must not exceed two-thirds of the amount that would have been allowed if you had been legally represented.

You will also be able to claim for what are known as disbursements which would have been incurred had you been represented. These will  include postage telephone and travel costs together with court fees, and should also include any payments recently made for legal services relating to the proceedings. Whether time spent on research is recoverable is a somewhat grey area, which will be at the discretion of the judge. Probably, a reasonable sum for time spent in researching the law or taking advice is in principle recoverable.